Advancing the introduction of the IHO S-100 Universal Data Model

Background
As is now well known within the world of electronic charting, the shift towards electronic charting within a universal data(base) model is a primary goal and the successful introduction of the S-100 Framework and its associated suite of product specifications is imperative to the future of safe navigation and the full exploitation of data sets beyond the navigational realm. The process of this introduction is a complex international challenge involving cooperation at the international institutional levels, right down to the minutiae of the technical specifications and operation for a wide range of users.

During 2020 and 2021 IIC Technologies’ Innovation Team have worked with the Korean Hydrographic and Oceanographic Agency (KHOA), together with other organisations (PROST, KRISO) and successfully progressed some of the key elements of the S-100 implementation.

These key advancements complement the release of the KHOA S-100 viewer into the public domain. With the progress in S-100 rollout during 2020 and 2021, IIC Technologies leading Innovation Team experts have contributed to addressing some of the identified key bottlenecks relating to S-100 s maturity and, ultimately, the use of S-100 for primary navigation. This has been critical work with important outcomes and two key areas were addressed.

S-98 interoperability
An analysis was carried out defining various uses of multiple S-100 data products, drawing together a number of pre-existing documents and defining how such products are used for primary navigation. Analysis of data used for IMO compliant Voyage Planning and Appraisal as well as Voyage monitoring were carried out. A comparison of features within each of the products and their attribution has been done and the results used to define an initial interoperability catalogue.

This interoperability catalogue can be used for the initial testing of multiple product specifications in the context of an ECDIS portrayal with the KHOA viewer. During the project, the release of the draft of S-98 Annex C "Harmonised Portrayal for ECDIS" was used to define some of the portrayal elements, in particular the "interleaving" of different products using interoperability level 1. This provides portrayal such as that shown in the following image (S-101 ENC alongside S-127 Marine Traffic Management features). 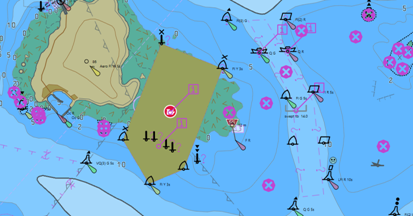 This capability is key to the eventual successful implementation of S-100 on the bridge of the SOLAS vessel and realisation of the benefits of S-100 for the end user.

S-164 development
IHO has supported S-57 ECDIS development with IHO S-64 for many years with its comprehensive set of test data sets. These test sets have been widely used by users from outside the IHO community, mainly type approval bodies who use them to verify functionality of developed ECDIS against the IEC61174 test standard.  The development of the S-100 version of this publication (S-164) will see a widened scope including multiple product specifications and their content as well as increased functionality, such as the so-called "Dual Fuel" mode , requiring co-existence testing with S-57 datasets.

S-164 will also need to offer the means for increased automation of the process to reduce manual operation and the first step is to enable access to tests and their component datasets and images via online methods.

This is a large increase in scope and this recent work delivered a proof-of-concept to manage the core tests, datasets and verification images in a live database environment, hosted in the cloud. A simple interface was designed and delivered. This is a major step forward to better structuring and growing of the S-64 test dataset scope to include the S-100 model and all its various product specifications. Ultimately, the full database structure should hold:

The successful roll-out of the S-100 suite is an international challenge for the top minds working at the forefront of the nautical charting industry and the broader ocean environment. Consequently, international cooperation and contributions are key and IIC Technologies is proud to contribute its expertise within the IHO community and with its colleagues who contributed to this project and testing.

The proposed architecture enables a far more manageable increase in the scope of the present S-64 to cope with the full S-164 implementation and allows for a cooperative approach to its definition. The aim is to continue development of the Proof-Of-Concept by further population of the database, full implementation of dataset and image repositories and demonstration clients to show the advantages of the approach.

The project is a testament to the synergy of IHO – Industry partnerships as advancements with the S-98 interoperability framework and implementation for key S-100 product specifications have been made together with the development of a framework for the full implementation of S-164.

IIC Technologies is a proud to have been a contributor to this leading international initiative.